Goats on a Donkey

I still have a herd of goats milling around my house because apparently I can’t have normal people problems. Animal Control finally showed up too, which apparently consists of one guy for the entire county, which apparently makes you crazy. Or maybe only a crazy man would take the job. Either way, crazy.

Me: Hi, are you here for the goats?

Animal Guy: Did you know all Germans are assholes?

Me: Uh, I guess they have somewhat of an unfortunate history, but I don’t know about all of them.

Animal Guy: Yep, all of them. And you know who’s the worst? The French. I hate the French. My sister married a French guy and I didn’t talk to her for five years. She called me up one day and says, “We shouldn’t be like this,” and I says, “Are you still married to that French guy?” She says, “Yeah,” so I haven’t talked to her for another two years.

Animal Guy: I can grab these few here, but I’m not going up that hill. I ain’t a billy-goat.

Animal Guy: What you need is some herdin’ dogs.

Animal Guy: Well, I’ll have to make some calls then.

If you can avoid ever having to call Animal Control, I suggest you do so.

I was also talking with SJ from Booksnobbery on Twitter. I was trying to be clever by saying that I wished these goats with get off their ass. But then I forgot that ass was a donkey term and not a goat term. Then SJ said she pictured a goat riding a donkey. So then I drew this for her. 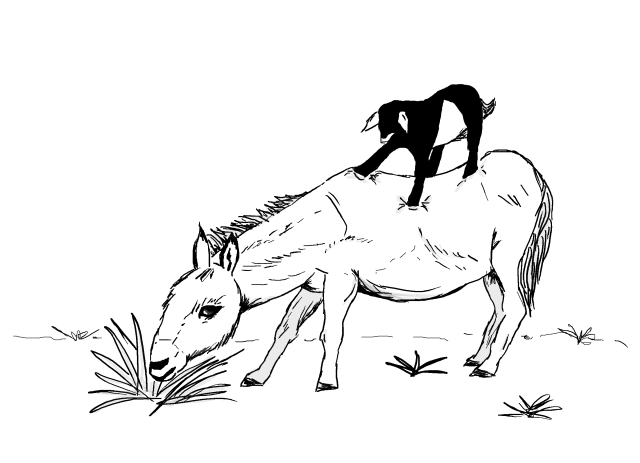 24 Responses to Goats on a Donkey